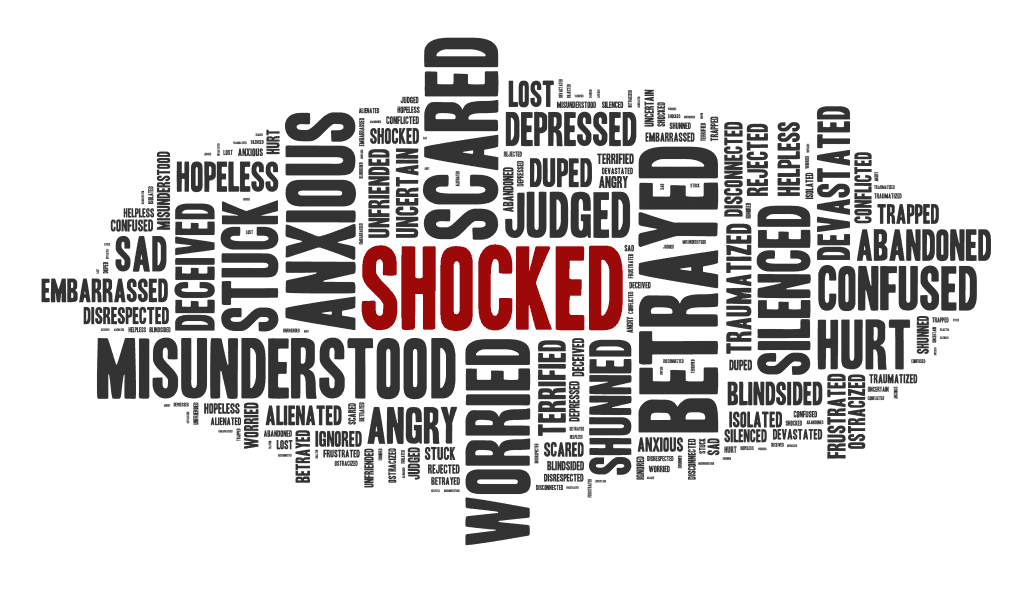 A Mormon faith crisis begins when our shelf comes down. Anyone who’s been through it knows exactly what a “shelf crash” means.

As Mormons, we were taught to put those things we don’t understand about the church “on a shelf” to look at later. The implication is that—given the church is true—eventually, we’ll get an answer to anything that troubles us. But the truth is you can only fit so much on a shelf.

When your shelf has reached maximum capacity, the whole thing can come down. And what a mess it leaves!

Food storage and the bean collapse

I want to share with you the most poignant description of a shelf collapse that I’ve come across, written by J.T.L. and shared with permission:

Early in our marriage my husband and I were long-term house sitters for a couple serving a mission. It was a great arrangement – we had a place to live and they had peace of mind knowing someone was caring for their home. As part of the arrangement, they encouraged us to use their copious food storage which for poor newlyweds was a huge blessing. Being good Mormons, there was a lot of food stored all over the house – it was sort of like living in an apocalyptic grocery store.

One night we woke up to a horrible crash followed by a soft cascading sound. When our heart rates slowed enough to assess the situation we realized that the shelf in our bedroom had collapsed, spilling its load of assorted dried legumes all over the bedroom floor. It was a phenomenal mess. We could hear beans finding their angle of repose for a long time after the initial cascade. In retrospect, it was quite spectacular.

15 years later, on a night in November, another shelf crashed to the floor. This one I had dutifully packed on my own – carefully filled with all my questions and concerns about LDS doctrine, practices and culture. I faithfully put them on the shelf, as instructed to do. That night, as I readied for bed and placed the new policy of denial of baptism for children of same-sex couples, the shelf tore from the wall and spilled the entire load all over my bedroom floor.

What does one do when years of accumulated turmoil gets dumped into your living space – in the room of your marriage bed? I mean really. What do you do? Here I am, a year later, still standing in my pile of beans, still wondering what to do. Still slightly shell-shocked that I am surrounded by the mess that came as such a heart-stopping surprise.

I’ve asked a few people to help me assess the situation but most people take one look, offer their condolences, and move on – glad that their own shelves are intact and speculating what I did wrong that caused mine to collapse. And so I am still standing with my pile of beans in the bedroom. My husband and I both live with the mess that has to be stepped over or waded through many times over the course of a day. There is no avoiding or ignoring it. I wake in the night to sounds of it shifting. It is there, quietly demanding to be dealt with.

Most of the time I just observe it, alone. Sometimes I get ambitious and sit down and start sorting – convinced that I can put everything back where it belongs – then I realize with exhaustion how all-consuming the task will be and do I really want to save them? They were distasteful in the first place – that’s why they were on the shelf. Other times I am ashamed for how long I’ve sat on a hill of beans and start sweeping it up to throw it away but then I stop – it’s still good food – it would be such a waste to toss it all.

What I long for in these lonely hours in my room is someone to sit down with me and help me sort out the kidneys from the pintos…or help me sweep it up and throw it away…or put up a new shelf and start over. I just need some help – but where do you find someone who is willing to sit for hours, days, weeks, months, years in someone else’s mess?

The word I use to describe my shelf break

After my own shelf broke, I started describing the feeling as a “reali-quake” (reality + earthquake).

First came the giant reali-quake, followed by many significant aftershocks.

My whole world was shifting. I was in emotional pain like never before and the Relief Society wasn’t bringing me dinners!

The community that I always thought would be there for me couldn’t see my pain. And why would they?

The church doesn’t prepare anyone for this.

The church teaches its members to judge anyone who can’t keep their shelf intact. It teaches people to believe that a person whose shelf collapsed must have done something wrong. Or, at least, they weren’t doing enough of what’s right:

In other words, the lessons at church all imply that those who leave have nobody to blame but themselves because there isn’t any valid reason to leave the church.

In the Mormon paradigm, anyone who leaves is either a threat to be avoided or a lost sheep that needs to be rescued. Regardless, the person who steps away is a problem to be dealt with—not a person to be understood.

So, what does a Mormon faith crisis feel like?

A crisis of trust.

It’s a time you want to be understood by the people you’ve always relied on more than you want air, but they’ve been taught to not want to understand.

Your friends in the church may try to “help” you, but they can’t fully validate the pain of your faith crisis or happiness you find outside the church. That would be anti–Mormon.

[Note: I completely understand why some active Mormons disagree with some of the above. It wasn’t until I stepped away from the church that I could see how the church teaches (a ton of things) indirectly. Of course, the church doesn’t teach anyone to act in negative ways towards those who leave.

Many people leaving the church today are suffering betrayal trauma because of significant breaches of trust. Active members of the church are taught they should seek to bring inactive members back–not be open to the possibility that those leaving are experiencing trauma for legitimate reason.]

What are the common negative emotions brought on by faith crisis?

While there is amazing relief from not having to keep making sense of things that don’t make sense, there’s also a ton of negative emotions during a faith transition. Especially at first.

I’ve heard people explain the painful aspects of having their shelf break. During the months (and sometimes years) after losing their testimony, people feel:

Besides all this, many grieve. They have lost their community, their certainty, their structured life, and their important relationships.

Many regret or resent. They realize they made decisions they wouldn’t have made if they’d known the church wasn’t true.

Many feel guilt and shame for having accepted and brought others into a belief system they now see as harmful.

Many go through an existential crisis wondering what’s the purpose of life, if God exists, and what matters anymore.

If your shelf has broken recently, here’s my message to you: All of these feelings are normal.

I’m so grateful for those who comforted me during the initial stages of my faith crisis, letting me know it gets better!

It has come to my attention that active members of the church are reading this article. This is awesome!

For those active in the church

You might be wondering what to say to someone who tells you they’re not attending church anymore. The most helpful thing you can do for them right now is to let go of any desire you may have to change their mind about anything connected to the church. Though rescuing them might feel loving to you, you don’t understand—church is PAINFUL for them.  Now is not the time to preach or to shut them out. If you want to show love, consider saying something like this:

For those currently experiencing a faith crisis

When you are in the realiquake stage, it may feel impossible to know how to connect with anyone who can’t see that reality has shifted. You might be wondering what to say to someone when you tell them you aren’t attending church anymore. Trying to have a conversation with someone who believes (what you believed not long ago) is like talking to an alternate version of yourself. So disorienting! I know it feels like the sanity of all humanity is on the line.

This is what I want to suggest: now is not the time to try to convince believers there are things about the church they can’t see. The most helpful thing you can do for them right now is to let go of any desire you may have to change their mind about anything connected to the church.

Though rescuing them might feel loving to you, you don’t understand—church is BEAUTIFUL for them.  Now is not the time to preach or to shut them out.  If you want to show love, consider saying something like this:

Being the one losing belief and being the one watching a loved one lose their belief is hard! So often, I wish non-believers and believers could just put their arms around one another and grieve together. There was something that we used to have in common that we don’t anymore. That’s loss. Maybe it’s a loss that wouldn’t be quite so painful if we could feel it together.